Skip to content
Enquire Now
Listen to our Podcast NOW

Pitfalls and benefits of hiring a personal assistant.

Pitfalls and benefits of hiring a personal assistant.

One of the best decisions I made when I set up Clicks for Profit was to hire an overseas virtual assistant, or just an overseas assistant.

Now coming from an agency background I was aware of the benefits and pitfalls of this and I thought I’d share some of those with you because these days, lots of people have virtual assistants,

I’d encourage you to have somebody to help you with any business, 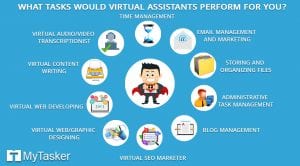 What Tasks Would Virtual Assistants Perform for You

doing the smaller stuff like data entry and little things that are repetitive and spend more time working on your business rather than in your business.

However, choose wisely ’cause you could end up with what I call false economy and that’s where you spend so much time briefing the person, training the person, making corrections that it ends up costing you more time and effort, so just be aware of that.

And these tips will hopefully help you.

I personally use an outsourcing company .

There’s quite a few out there, Airtasker, Upwork or Virtually Yours. The benefit of that is they record what your assistant is up to, you can see what’s going on

during the time they’re working for you.

Also helps to deal with the financial side of things, different currencies and so on and so forth.

But make sure you can approach that person independently of the systems provided by the outsource companies,

Because they can’t give you honest feedback when they’re doing it all through the outsourcing company’s system.

So just make sure you have another way of doing that as well and that may just take a little bit of time.

Hire people like you would hire somebody here locally, do interviews, look at their work, get to know them a little bit more, have a few calls if necessary, take the time to get to know them.

Be wary of companies that want to do everything for you, so give us a brief and we’ll take care of everything. They’re not really working for you, they’re working for the company and themselves and, you know what, they’re just interested in the money.

Talking about money, pay more than you have to

You know what, pay double, pay for it, okay? It’s still gonna be a bit cheaper than what you pay in Australia and there’s a bit more flexibility there for you.

And then they’ll feel lucky to work for you, they’ll make more of an effort rather than treat you as another outsource client that just gives them some money.

Remember, they are part of your team.

One of my early mistakes is not spending enough time with the team, I’d just send them the information that I needed to have done and not explain it to them, like I would to somebody here.

I wouldn’t expect just to throw some work at somebody here locally and expect them to get on with it,

I’d give them a full brief, follow up, keep them up to date. In fact, I Skype people overseas, I’m in regular contact with them, just to make sure that we maintain that human connection.

So if you know them, they know you, it’s only what you should be doing in any company anyway, so don’t just treat them as a resource.

The most important thing is not to outsource is writers, do not outsource writers

We’ve all been overseas and come across people whose English is their second language and we’ve had a few issues, multiply that by not being in front of them, multiply that by local jargon, z instead of s and so forth and you have a lot of a mess. Don’t mess around with that, hire someone locally to do your copywriting.

Make sure you can terminate when you need to.

Some of them have 30 days notice or you gotta pay up for the end of the contract or end of the project, whatever it may be.

So just make sure you can terminate at any time.

And also make sure you have the passwords.

If they’re doing website development, make sure you hold the master passwords.

Really, really critical that you do that.

And don’t just limit yourself to looking overseas, there are some assistants you can get in Australia that are a pretty reasonable rate.

At the end of the day it gives you back time, so think about how much time you’re getting back and use that as your calculation, not just the money that’s coming out of your pocket.